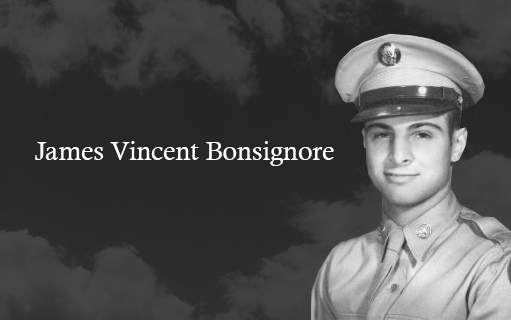 James Vincent Bonsignore of Medford, passed away peacefully on October 5, 2017, surrounded by his loving family. He was 87 years old. His last breath was spent looking into the eyes of his best friend and beloved wife of 66 years, Josephine.

Jim attended Cambridge Rindge and Latin High School. He then enlisted in the United States Air Force where he served overseas in the Korean War. Upon his return, he went on to earn his Bachelor’s and Master’s degrees at Boston University. Throughout his education he was a track star. After completion of his degrees, he met the love of his life, Josephine Catalanotto, at a college dance. After a formal and traditional Italian courting, they were married on June 23, 1957, and he became the son-in-law of Onofrio and Maria Catalanotto of Salemi, Sicily, and the brother-in-law of Vita and Brian Sullivan, Anna Catalanotto, and Francis and Richard Tomeo, all of Medford.

Throughout his life, Jim was a hard-working man. In addition to being a full time school teacher. Jim worked no less than two part-time and seasonal jobs in any given year. President John F. Kennedy, while serving in the United States of representatives, assisted Jim in obtaining his first job as a school teacher, thanks to his father-in-law Onofrio Catalanotto. Jim had a way of teaching to everyone’s ability and motivated all to achieve and excel. Jim was loved by all of his students and everyone who met him. He was often referred to as a saint because of his kind heartedness, contagious smile, and his passion for helping others. Jim never said no to anyone and always went out of his way for others.

He loved music and spent most of his time at home serenading his lovely wife. His favorite singers were Frank Sinatra, Dean Martin, and Vic Damone. Jim also loved comedy and attended many comedy shows.

James was an incredible but frugal father to his four children. He taught his children patience, humor, and to humbly serve others. He taught them to do their best and then to do better, to work hard because they are entitled to nothing, and before it became popular – to do their job…. regardless of their station in life. Jim always treated everyone with respect and strove to never be an imposition to anyone. He taught his children to be helpful and to be a part of the solution and not part of the problem.

Jim was also an amazing grandfather to his seven grandchildren. He went to every one of his grandchildren’s sporting games, activities, and events. For example, his grandchildren Warren and Jarred played six sports, and he and his wife Josie attended every home and away game from the time that they were 4 years old until the time they went off to college. Typically, he would arrive a half hour early and call his daughter Marie to ask where they were.

He loved politics and was influential in many City of Medford elections and served as the campaign manager for several candidates over the years. Papa, as he was called by many, was always cheerful and had nice things to say about everyone he met. He even earned the nickname “Mr. Smiley” during his stay at the rehabilitation facility.

Jim touched many lives and will be dearly missed by many. The example and inspiration that he left behind will have the lasting effect on everyone he touched. He never stopped smiling and he would want you to celebrate his life by smiling.

His funeral home will be from the Dello Russo Funeral Home, 306 Main St., Medford on Tuesday, October 10th at 9 AM followed by a funeral mass celebrated in St. Francis of Assisi Church, 441 Fellsway West, Medford at 10 AM. Relatives and friends are respectfully invited to attend. Visiting hours will be held on Monday, October 9th from 4-8 PM. Services will conclude with burial at Oak Grove Cemetery, Medford.

In lieu of flowers contributions may be sent in James name to the Disabled American Veterans Memorial Program, P.O. Box 14301, Cincinnati, OH 45250-0301