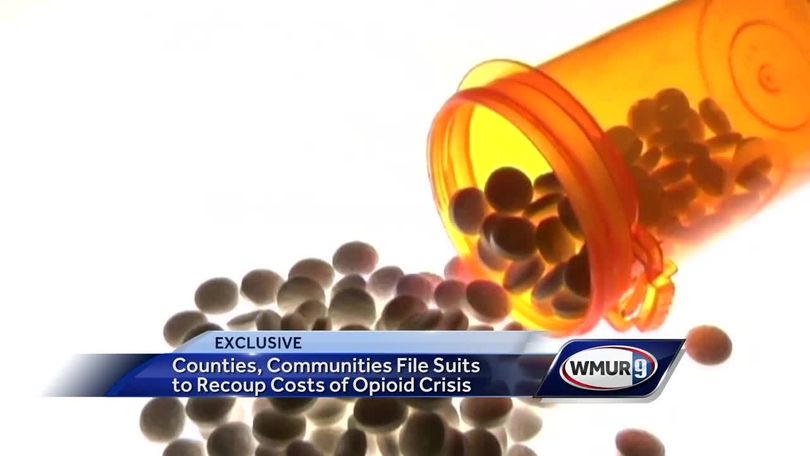 New lawsuits filed by six New Hampshire counties and two towns are aimed at trying to recoup millions of dollars lost by local governments in the state’s opioid crisis.

Pharmaceutical companies, drug stores and doctors have been named in the lawsuits, in which plaintiffs outline a strategy that they said was used to not only downplay the destructive potential of opioids, but also to recruit and pay doctors to propagate the idea that opioids are a low-risk, highly effective way to manage pain.

The lawsuits accused the companies of coining the term “pseudo-withdrawal symptoms” and recommending higher doses of opioids to alleviate discomfort.

“We’re going up against a well-funded machine. They make billions of dollars,” attorney Robert Bonsignore said. “And we’re very confident we’re going to take them down, and I won’t rest until they get taken down — period.”

Bonsignore said he cut his teeth as a young lawyer on a class-action lawsuit against big tobacco, and he said this mass tort has a lot of similarities.

“Here we have a public health crisis, artificially created, and the government and, therefore, the taxpayers are forced to bear the cost,” he said.

Rockingham, Strafford, Belmont, Grafton, Sullivan and Cheshire counties, along with the cities of Claremont and Belmont, are fighting to recoup millions of dollars spent in the opioid epidemic.

Maglaras led the charge for compensation more than a year and a half ago. He said he was tired of watching the death and destruction and costs build up in Strafford County because of opioid addiction.

“I understand that we need painkillers. There’s no question about it,” he said. “To make them regulate themselves and give kickback to doctors is just hideous, in my opinion.”

The lawsuits paint a picture of pharmaceutical companies targeting certain doctors based on their prescribing habits and incentivizing them to promote opioids and participate in the branding. The lawsuits name doctors who Bonsignore called “bad apples.”

“They could cooperate with us and provide us with testimony,” he said. “That might be one avenue in which they find themselves in less hot water.”

AmerisourceBergen, Teva Pharmaceutical Industries and Endo International, three of more than a dozen companies being sued, responded to News 9’s request for comment, offering statements about their commitment to participating actively in the reduction of drug diversion and misuse.

Endo officials denied the allegations and said they intend to mount a vigorous defense.