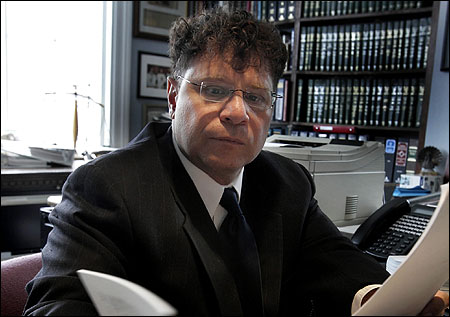 Page 2 of 3 — Corporate behemoths, he asserted, have ”ripped off consumers” for hundreds of millions of dollars, but ”the focus is not on whether they should be policing themselves or whether there should be more laws protecting consumers. The focus is turned on its head . . . on the trial lawyers . . . on the fees.”

”No one cared,” he said, of reports that Gillette chief executive James M. Kilts may receive a $173 million windfall as a result of the company’s sale to Procter & Gamble. ”But if a lawyer makes $200,000, that’s wrong. It’s not wrong; it’s right.”

Bonsignore said his contingency-based work is risky, requiring large upfront outlays of cash with no guarantee of return. Six-figure expenditures in some recent cases ”went poof” when the cases were dismissed or ”sucked up” into federal cases brought by other lawyers, he said.

Bonsignore estimates his practice generally nets about $500,000 a year (he rents out much of the old funeral home), bringing him a comfortable lifestyle. He drives a 1998 Lincoln Navigator sport utility vehicle, bought used (”the first nice car I ever owned”), and owns a waterfront home on Ipswich’s Great Neck, a small ranch-style house, valued by the town at $658,700, on a cliff overlooking Plum Island Sound.

His marriage and law practice are, in his words, ”bicoastal” involving ”a lot of airplane miles.” His wife and children, ages 2 and 6, reside in Sacramento, where Brewer has been executive director of the Consumer Attorneys of California and works on cases for their law firm, he said. Her husband has worked in California, too, but said he barely flunked the bar exam there and has been too busy with local cases to retake the test or relocate.

Active in local and national legal circles, Bonsignore has won a number of honors. A public service award, named for him, is given by the New Lawyers Division of the Association of Trial Lawyers of America. He is generous with his time and money to charities and pro bono cases, according to associates; for instance, he heads the collection of business attire from lawyers for people who are down and out but looking for work.

”You can’t walk into a job interview if you look like a bum,” he said.

Until Bonsignore raised consumers’ objections, large stores, some stocking hundreds of thousands of items, had routinely ignored the state’s item-pricing regulation, which required individual tags on every screwdriver and knickknack.

Bonsignore was the lawyer of last resort for Colman M. Herman, a Dorchester consumer activist, to pressure big retailers who ignored the item-pricing law. A freelance writer, Herman in 2002 won a Supreme Judicial Court ruling, and the statutory minimum $25 in damages from Home Depot. Herman approached many legal figures, but no one would take on class-action case except the little-known lawyer from Medford.